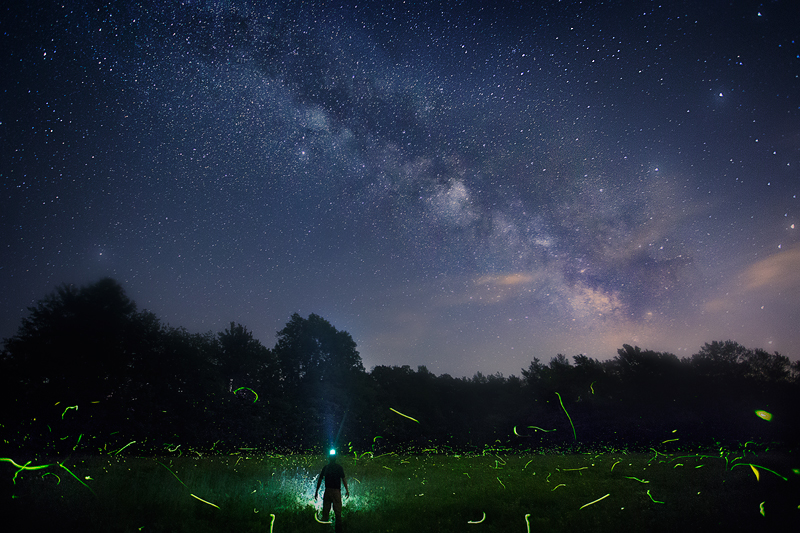 A flashback to my childhood! I remember running around in meadows after dark catching these amazing insects and putting them in a jar that I then put on my nightstand and stared at in awe! Thankfully they are still here in abundance in Pelham, MA where I now live!! There are a couple of meadows near my home that light up every June and I have wanted to capture the show for years but I always missed the peak activity when I finally get around to breaking out the camera. Not this year!!! As soon as I saw the tiny greenish yellow lights I went out with my camera. I took this capture at about 1am and there were more fireflies than I have ever seen!!!! The Milky Way was a bonus. I didn't expect to see much because of light pollution. To be staring at the Milky Way rising and to be surrounded by these flashing insects was mind blowing!!! They were landing on me and my camera equipment throughout the shoot. I think they might have been attracted to my head lamp. I'm so glad I didn't wait because I've gone out a few time since this capture and only seen a fraction of the numbers I saw on this night. It must have been the peak night!!! Magic! This image consists of one exposure for 95% of the content (the sky, me and the fireflies). I took a couple additional exposures of the fireflies that I manually blended in. Each exposure is F4, 30sec @ iso 6400 w/ my 17-40mm lens. Some Firefly Facts 1. There are 2 dozen different species in Massachusetts!!! 2. Of the 24 species here in MA only 3 flash (that we know of)!! 3. Fireflies are not flies they are beetles. 4. Each fire fly species has it's own secret flashing code to communicate with members of it's species. 5. Bioluminescense is the chemical reaction that causes the flash. Photo © copyright by Patrick Zephyr.